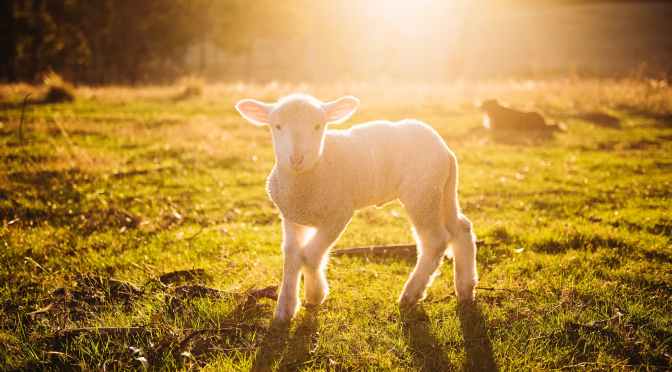 The central figure of Revelation is the slain Lamb, who alone is worthy to open the sealed scroll – Revelation 5:5-14.

In the preceding paragraph, John saw the scroll sealed with seven seals held tightly in the right hand of the “One Who Sits on the Throne.” A search was made throughout the Cosmos to find someone “worthy” to break the seals and open the scroll, but no one could be found. This caused John to weep profusely. If the scroll remained sealed, its contents could not be revealed and implemented.

However, one of the twenty-four “elders” told John not to weep, for the “lion of the tribe of Judah, the root of David overcame,” and therefore, he was “worthy” to take and open the scroll.

He “overcame” translates the Greek verb nikaō, the same one rendered “overcome” numerous times in the letters to the “seven churches” (“to the one who overcomes…”). Especially relevant is the final promise made by Jesus at the conclusion of the seven letters:

In other words, Jesus “overcame” by his Death and Resurrection, the victory that qualified him to stand in the “midst of the throne.” And ever since, he has been summoning his saints to “overcome” in the same manner.

“Lion of Judah” and the “Root of David” are messianic designations that identify him as the promised Messiah of Israel. In Genesis, the tribe of Judah was called “a lion’s whelp” that held the scepter until the arrival of the one to whom it belongs, and “to him shall be the obedience of the peoples.” Likewise, Isaiah prophesied of the time when “the root of Jesse will stand as an ensign to the peoples” – (Genesis 49:9-10, Isaiah 11:1-10).

John heard “Lion of the tribe of Judah,” but when he saw the “Lamb” rather than the “lion,” and one that had been “slain.” What he saw interpreted what he first heard. The “Lamb” is the Messiah, but he fulfills that role in a paradoxical manner, not as a royal figure, but instead, as the sacrificial victim. This anchors the vision in the historical event of the Crucifixion.

“Lamb” translates the Greek word arnion, the diminutive form of the more common term arnén or “lamb.” It refers to a juvenile lamb and becomes the primary designation for Jesus for the remainder of the book. It is applied to him a total of twenty-eight times (4 x 7). In contrast, in the book, ‘Jesus’ occurs fourteen and ‘Christ’ seven times.

“Slain” translates the Greek verb sphazō, which is used often in the Septuagint version of the Old Testament for the Hebrew verb shachat for the “slaying” of sacrificial animals (Strong’s – #G4969). This usage reflects the passage from Isaiahwhen the Suffering Servant was compared to “a lamb led to the slaughter” (sphagé, from sphazō).

The Lamb had “seven horns and seven eyes.” Horns symbolize power. The “seven eyes” were identified previously as “the seven Spirits of God sent forth into all the earth,” an allusion to the vision in the Book of Zechariah where a stone with “seven eyes” was set before Joshua to achieve the removal of sin from the land – “In one day.” The “seven lamps” were the “eyes of Yahweh that run to and fro through the whole earth.” The eyes symbolize Yahweh’s spirit (“Not by might but by My Spirit, says Yahweh”) – (Zechariah 3:9, 4:10).

Thus, the “Lamb” sits on the “throne” and possesses all the authority of God, including the “seven eyes” that see all things that transpire in heaven and on the earth. Nothing is hidden from the sight of the “Lamb.”

Upon his arrival, the “Lamb” approached the “throne” and took the “sealed scroll” from the “right hand of the One Who was sitting”on it. The image parallels the vision from Daniel when one “like a son of man” approached the throne of the “Ancient of Days” to receive the authority to reign over “all peoples, races and tongues” – (Daniel 7:13-14).

His authority was proclaimed by heaven and earth, and his sovereignty was the result of his sacrificial death. It was his submission to an unjust death that made him “worthy” to open the scroll, and thereby he assumed his reign over History and the Cosmos.

Each of the twenty-four “elders” held a bowl of “incense,” symbolizing the “prayers of saints.” Thus, they were performing priestly functions, they represented the redeemed people of God ministering before the “throne.”

The understanding that his sovereignty is the result of his death is confirmed by the “new song” song by the four “living creatures” and the “twenty-four elders”:

The enthronement of the “Lamb” was accomplished in the Death and Resurrection of Jesus. The victorious scene before the reader portrays the victory that already has been achieved. His reign and kingdom are declared with past tense verbs, they are accomplished facts.

The myriad of heavenly voices sang the “new song.” In chapter 4, all creatures throughout the Creation sang praises to the “One Who Sits on the Throne” for His creative acts. Now, the “new song” rings out in praise of the “Lamb” for his sacrificial act. The song is “new” because his death inaugurated the long-awaited redemption that will culminate in “New Jerusalem,” in the “new heavens and the new earth” – (“Behold, I make all things new” – Revelation 4:8-11, 21:1-5).

The “Lamb” is the true Messiah of Israel, but his victory has achieved the redemption of men and women from “every tribe and tongue and people and nation.” Traditional social and ethnic boundaries have no place in his kingdom. Note well the verbal parallel to the passage fromDaniel 7:13-14, “That all peoples, races and tongues should render service to him.”

By his death, the “Lamb” made men from every nation a “kingdom of priests.” Collectively, they are a kingdom; individually, they perform priestly acts. The calling once given to Israel now is fulfilled by the people from every nation purchased by the lifeblood of Jesus – (Exodus 19:5-6, Revelation 1:6, 20:6).

The redeemed participate in his reign in their priestly capacities. Jesus promised that believers who overcame would have authority over nations. But this reign is implemented through priestly acts of witness, martyrdom, prayer, and worship.

There is a textual variant in verse 10. Some ancient Greek manuscripts read, “they will reign on the earth” (future tense), while others read “they are reigning” (present tense). The evidence is divided evenly. Whichever reading was the original, the message remains the same. If the redeemed reign now, it is because of the death of the Lamb. If they begin to reign in the future, likewise, it will be due to the death of Jesus – (Revelation 5:10).

Previously, John presented the participation of the saints in the priestly kingdom as a present reality; already, Jesus is the “ruler of the kings of the earth”; already, his disciples are a “priestly kingdom.” This larger context indicates that the original verb in verse 10 was in the present tense – (Revelation 1:5-9).

The entire heavenly choir began to adore the “Lamb” for his act of redemption, proclaiming him “worthy” to receive all “power and riches and wisdom and might and honor and glory and blessing.” This was followed by praise for God and the “Lamb” from “every created thing that is in heaven and on the earth and under the earth and on the sea.” The redemptive act of Jesus included the entire creation, not just humanity. How that redemption is brought to completion will be unveiled as the “Lamb” breaks the “seven seals” and begins to open the “sealed scroll.”

By his willing submission to death, Jesus fulfilled the role of the Messiah and qualified as the Sovereign over heaven and earth. As the “Lamb” with “seven horns,” he has full authority. As the one who possesses the “seven eyes” of Yahweh, he has the wisdom and knowledge necessary to reign. The extent of his authority is universal, for nothing is hidden from his eyes.

What follows in the remainder of the bookis the result of the sacrificial death of the “Lamb.” In the interim between his death and the arrival of “New Jerusalem,” he reigns firmly over the events on the earth, and especially over the ones that impact the marginalized “churches of Asia.”

33 thoughts on “WORTHY IS THE LAMB”

SOCIAL IMPLICATIONS OF THE LAW

To pursue a Torah-observant lifestyle is to re-erect the old social barriers – Galatians 3:26-4:7.

Paul argued for tolerance within the church on food regulations and observing holy days because the “shadows” have found their fulfillment in Jesus – Romans 14:1-12.